Transforming is one of the abilites that Di'angelo and Erasi possess.

Di'angelo has the ability to change into animals, objects, and even humans. However, this ability is limited. He is only able to change into objects and beings that will have his likeness and he won't be able to do their abilities (except for a few of them, as he was easily able to fly as an angel (though this may just be levitating)). Now, he has the crown, he is able to change into anything and anyone he wants, also being able to do their abilities. That comes with side-effects though, as Di'angelo now has Muscular Man's crotch after being him for a while. Di'angelo has a weakness with this, though, if he's reacted towards negatively or calmly, mostly depending on what he is, he can be subdued and reverts back to his normal self, usually leaving him confused as to what happened (examples are when he was a bear and Sonja pets him, causing him to change back and act dog-like for once and when he changed into a bee and is swatted with a newspaper, causing him to change back and become confused).

Erasi, because she has a greater control over her powers, compared to Di'angelo, is able to change into anything she wants. She can also generate clones of herself and make them all the same thing that she is or different objects/beings. Also, unlike Di'angelo, she can do what the object/being can do.

Sparki gains control of Di'angelo's crown for 3 episodes, allowing him to shapeshift, also. However, this was soon limited to him staying in Muscular Man's body. The whole ability is taken from him when everyone decided they had enough of Muscular Sparki. 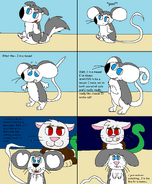 Erasi changing Di'angelo into a mouse and herself into a cat to consume him.
Add a photo to this gallery
Retrieved from "https://diangelo.fandom.com/wiki/Transforming?oldid=6861"
Community content is available under CC-BY-SA unless otherwise noted.