Thomas is Di'angelo's father. Thomas (unlike Sicily) is very serious in thought and matter and doesn't take to jokes to easily. However, he is known to have a lighter side to himself. Thomas is one of the most popular characters on the Di'angelo series.

Thomas has a very serious and fatherly personality. He doesn't care for Di'angelo and Sicily's shenanigans, which the both of them do everyday. He has a calm personality, unlike most of the family, not being subject to paranoia or anxiety problems like Di'angelo and Sicily are. Even though the latter (Di'angelo and Sicily) are neurotic, Thomas doesn't let their insanity bother him. His favorite hobbies are reading and watching TV, as he is usually seen doing one or the other. Thomas, sometimes, will be playful and/or fun, (actually years ago, he was a lot more energetic and fun than he is now) and will often tussle along with Sicily or follow along with anything Di'angelo want to do. He seems not to like to wear clothes because he's always feels silly in them for some reason, so he prefers to be a nudist, like Di'angelo and Sicily.

Thomas is a 6.5 feet stuffed animal Husky. He has blue eyes, erect (ears that stand up) ears, white arms, legs, and face, a silver gray back, a tuft of hair on his head. He usually has a serious/unhappy look on his face and his eyes are usually half shut. 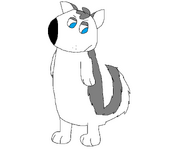 Thomas as he appears in Di'angelo: The Animated Series.

Di'angelo asking Thomas for an allowance (when he was 10) and Thomas rejecting him in his thoughts.

Di'angelo gets Thomas some Lakers clothes and Thom doesn't really like them.
Add a photo to this gallery
Retrieved from "https://diangelo.fandom.com/wiki/Thomas?oldid=7214"
Community content is available under CC-BY-SA unless otherwise noted.