Tamakii is a character in season two of Di'angelo and Aza. He was created by Random Princess and is voiced by Yoshinori Fujita.

Tamakii is basically a male version of Aza, personality wise. He is kind hearted and doesn't like fighting at all. He was bullied a lot during his childhood for being a "softy", giving him a very low self-esteem. He can come off as self-centered at times, but he's really not at all. Tamakii also comes from royalty as well. He is the prince of Mars, making him (like Aza) think that most things are childish, especially earthlings. But, (also like Aza) he doesn't really mean to affend anyone.

Tamakii is 20 years old and has light green hair,golden brown eyes and some what of an orangeish complection. He usually dresses formal, like a button down shirt, dress shoes, pants and a long neck tie. He also has rectangular fake glasses that he only wears because as he says, "My glasses make me appear smart, and as both Aza and Inkaira said, they make me look even more handsome than I already am". He also has a dragon form which has white scales, green hair, six legs, and horns.

Aza and Tamakii have been friends since they were little. They met at a royal confrence, when Aza was four and Tamakii was six. As they got older Tamakii tought Aza how to use her powers and Aza formed a crush on Tamakii. They don't see each other much now, except on holidays and stuff. She still has a crush on him even though she has a boyfriend now, which makes her feel guilty whenever she fangirls over Tamakii from time to time. 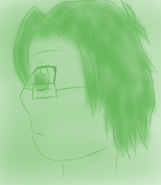 A drawing of Tamakii by Random Princess
Add a photo to this gallery
Retrieved from "https://diangelo.fandom.com/wiki/Tamakii?oldid=6618"
Community content is available under CC-BY-SA unless otherwise noted.