Rina is a minor character on the animated/anime series "Di'angelo and Aza". In the series, Rina is Aza's best friend and the two are extremely close. She is voiced by Random Princess.

Rina finds Di'angelo very annoying (probably because she says that Aza talks about him all the time) and her "hatred" grew even worse after Aza and Di'angelo broke up (although the two got back together a couple episodes later making Rina hate Di'angelo even worse) causing her to attack him almost every time she's around him. She is also a space alien and lives on Maroonason along with Aza. Rina is pushy and sassy and never likes it when is mean to or someone hurts her or Aza. Rina is 20 years old and her birthday is on April 20th. She also has super powers like Aza but hers is weeker than Aza's (because of Aza's royalty).

Rina has light pink hair and usually dresses in a skirt and a frilly top (similar to Aza's style of clothing).

Rina seems to have to best relationship with Aza than anyone. Even though the two are close, Rina seems to be oblivious to what Aza really likes such as her intrest in fashion (some times), boys (etc.)

Rina has a extreme hatred of Di'angelo (Di'angelo and Aza). It could she's jealous of him (because he's all Aza talks about), her and Aza's thing with their friendship (how they won't let anyone hurt each other) and how Di'angelo supposedly broke that (because of him unintentionally getting themselves (him and Aza) hurt almost all of the time), or it could be that she is jelious of Aza and Di'angelo's relationship becouse acording to Aza she hasnt had a boyfriend since the to of them were ten years old.

Rina doesn't seem to have a problem with Inzen. In fact, it seems like they're okay with each other (they're often seen doing things together such as watching TV and other various activities). Rina, will at times, try to make Inzen mad at Di'angelo for something (Di'angelo's Girls is a good example).

Rina probably has no problem with Domino. She's maybe even okay with him because Domino gives Di'angelo trouble at times. It's unknown at this moment.

A tablet drawing of Rina by Random Princess. 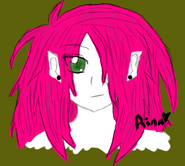 A picture of Rina also by Random Princess.
Add a photo to this gallery
Retrieved from "https://diangelo.fandom.com/wiki/Rina?oldid=6590"
Community content is available under CC-BY-SA unless otherwise noted.