Ongaku is an episode of Di'angelo and Aza. It is the first episode of the series to be based off of a song/music video, the song is called "Paradise of Light and Shadow".

The episode starts by showing the last "utahime" (Yninu) laying dead at a huge black dragon's feet / clause's in a giant cave underneath a cliff. The screen then shows Siakriss (evil sorceress/dragon's guardian) looking over the cliff at Yninu. The scene then changes to Aza and Di'angelo playing in the woods outside Aza's castle, when two knights step out of a green portal and say that Aza has been chosen to be the next utahime and force her to come with them, leaving Di'angelo behind. The scene then changes again to Siakriss explaining to Aza that she must sing to the dragon to make it sleep so that it shall bless the planet that they're on (Ongaku) until she dies and every time she stops singing the dragon will injure her badly. Before Aza has time to say anything Siakriss removes Aza's powers with her magical staff (so she won't use them to escape the planet) and the knights throw Aza off the cliff and into the cave with the dragon. The scene then goes back to Di'angelo freaking out over what just happened when Rina (who saw the whole thing from up in a tree) gets down from the tree she was in and literally slaps some sense into him. Then she explains to him what a utahime is and that Aza is doomed to sing to the evil sorceress's (Siakriss) dragon for the rest of her life unless he goes and rescues her. So she transports Di'angelo to Ongaku and he starts on his journey to the princess's (Opus) palace to find out where the knight took Aza. On his way there he meets a blacksmith named Hynunan who asks him where he is going. At first Di'angelo refuses to tell him but eventually he does and Hynunan decides to come with him on his journey. He also mentions that his friend, Kaynin, who was betrayed by Opus and thrown in jail and then he says to Di'angelo that if he helps him break Kaynin out of jail, he will give him a sword for free. Di'angelo agrees with him and Hynunan gives him the sword and the two make there way to the palace.

(to be continued later)

Aza's outfit for after she is captured by the nights (and for the rest of the episode) only insted of a big white bow in her hair she has a crown made out of flowers.

Yninu (the utahime before Aza)

An upclose view of Kaynin.

An upclose view of Siacriss.

An upclose view of Opus. 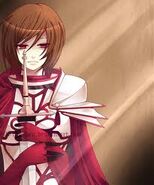 An upclose view of Iku.

An upclose view of Hynunan.

An upclose view of Urain.

Iku, when she finds out she's been replaced by Urain.

The dragon, with Yninu laying dead at its feet or clause's

Hynunan breaking Kaynin out of the dungon.
Add a photo to this gallery
Retrieved from "https://diangelo.fandom.com/wiki/Ongaku?oldid=5826"
Community content is available under CC-BY-SA unless otherwise noted.