Marella is Aza's huge cat that lives in the castle on Maroonason. She is a character on Di'angelo and Aza.

She is very loving and playful, but is also very strong and fat. On occasion Aza will ride her like a horse and tells her to attack people at times which she does. Although Marella is very loving, she will defend Aza or Inzen if nessesary. Marella was actually given to Aza for her 6th birthday as her bodyguard by Inzen. Marella has blue hair and usually has a red bow on the top of her head.

Di'angelo is extremely fearful of her (because she is a cat (and a giant one at that)). He is usually frightened by the sight of her and will curl into a ball or hide in or under somewhere to get away from her. Aza will usually get upset or mad that he's scared of her and will often try to make him make friends with Marella. It will only work few a little bit, and then he'll be back to the way he was again. In the movie, he seemed to overcome his fear of her, but in the next episode she appeared in, he has a fear of her again, meaning that the relationship was short-lived between them. Also, whenever he overcomes his fear of Marella, he seems to want to chase her up a tree (like a dog normally would). Marella's relationship with Di'angelo, however, isn't on a negative note. She believes he likes her and is her friend. Di'angelo believes she's evil and will kill and/or eat him. 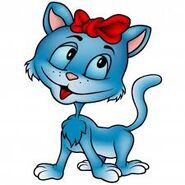 Di'angelo and Marella's feelings about each other.
Add a photo to this gallery
Retrieved from "https://diangelo.fandom.com/wiki/Marella?oldid=7275"
Community content is available under CC-BY-SA unless otherwise noted.