Inzen is a minor charater on the animated/anime series "Di'angelo and Aza". He is voiced by Tom Kenny.

Inzen adopted Aza when she was 5 year old, shortly after her parents were killed by assassins. So, he is Aza's adoptive father. Inzen is the king of the planet Maroonason. He is very kind hearted, but also very pushy at times and does not like to be told what to do. He is 54 years old and his birthday is on Noverber 4th. He does seem to have a problem with Di'angelo, though. 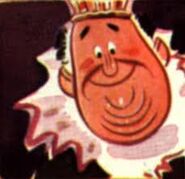 Add a photo to this gallery
Retrieved from "https://diangelo.fandom.com/wiki/Inzen?oldid=5751"
Community content is available under CC-BY-SA unless otherwise noted.