Insane Di'angelo is a character in the film Di'angelo and Aza the Movie. He is basically Di'angelo gone insane. He only [as of now] is going to appear in this movie. But, there are plans in the future to bring him back.

This was caused by him being on the planet [because apparently there's something there that puts stuffed animals under hypnosis when they're there]. He was under hypnosis when it happened and snapped himself out of it when he bit his tail [after chasing it]. He stays insane for the rest of the movie, but is still able to function well. He probably went insane because he's trying to control the hypnosis and function normally at the same time.

Di'angelo seems to be more dog-like and instinctual when he's insane like this. He also seems to be able to think clearly a little bit more than when he's normal. He seems to revert to a child [or puppy]-like state when he's like this, often wanting Aza to let him do dog-like things like chasing his tail or her to rub his belly [while instead she tickles him]. He [depending on his senses] seems to be able to reason better also. He also seems to hear things better also. Di'angelo, however, also seems gets more anxious and scared easier and will want to spin more often. He knows he's going insane, while Aza just thinks it's stress. He also has bouts of extreme insaniness that makes him get furious if he sees anything happen to someone he cares about (Aza at this point). He also seems to be smarter than he regularly is. Di'angelo can also break himself out of his spinning cycle, when someone is in distress or he senses danger and quickly find a way to get himself out of trouble. He's possibly a better person when he's insane. He often gets mad at random times and threaten the person that he will attack them. He switches personality fast too (i.e. If he's angry or upset, Aza will often tell him to calm down and he will just like that). This is also caused by someone making him angry or upset. Di'angelo also seems to be very flippy and often go insane from a simple misunderstanding or problem and will go into a rage. Aza claims that she doesn't to see him like that. Despite being insane, he seems to have some kind of sanity and is able to think clearly. His head also hurts at random times (possibly from the stress), too (to the point he gets in a fetal position and holds his head, complaining about his pain). This is something else Aza doesn't like to see.

Insane Di'angelo looks similar to Di'angelo regularly except for a few things. He has heterochromia [caused by the hypnosis] causing him to have one blue eye and one green one. for some reason it won't go away for the rest of the movie. His fur is extremely messy and raggedy. 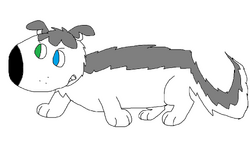 Insane Di'angelo when mad [or in protective mode]. 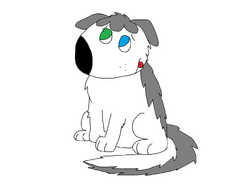 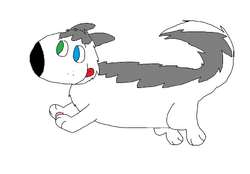 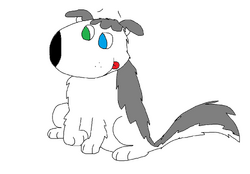 Insane Di'angelo
Add a photo to this gallery
Retrieved from "https://diangelo.fandom.com/wiki/Insane_Di%27angelo?oldid=5828"
Community content is available under CC-BY-SA unless otherwise noted.