He is a 6 ft. tall Stuffed animal Husky. Di'angelo in Di'angelo and Aza has a different personality than the other two. He's selfless, mature [to a short extent], loyal, kind, caring, sweet-natured, and trustworthy, than his other "cousins".

Di'angelo's personality is more sensitive in this series than in the other two. He's caring and selfless [something the Di'angelo from Di'angelo the Animated Series wouldn't DARE to be]. He's very loving and kind. He has a sweet nature about him. Di'angelo is also very loyal to someone he cares about a lot (Aza). He really cares for Aza, even willing to lay his life on the line for her. He apparently will get depressed if she's not going with him or she leaves him alone for a long period of time. He's very helpful, often assisting someone with something. Di'angelo is very protective of Aza, often going into a agressive or pyschotic state (believing this will scare off the other person). He has a shy personality to which he hates to get attention and would rather be a shut-in. He claims he tries to fit in with others, which makes him embarrassed when he does normal dog-like things (like wagging his tail). He after the movie, he has no problem with these things anymore. Di'angelo also doesn't like expressing his feeling and emotions to others because of him feeling embarrassed by this, too. He has about 8 phobias: death, spiders, roaches, ferris wheels (this is unknown why), heights, cats, stage fright, and fire (this is definitely known why). He has a perfect singing voice, but doesn't like sing in front of others because his brother embarrassed him in front of his friends when he was younger (he was singing a female song and not a male one). He vowed from that day he was never going to sing in public (that was public to him) again. Probably never sing again. Of course, he does in the movie. Another reason he doesn't like to sing is because his voice is light and to him it sounds feminine. Aza tries to reassure him it doesn't, but he won't listen. Another reason could be because he doesn't like to draw attention to himself (but he does unwillingly) and he believes he will if people were to hear him sing. He usually has a low self-esteem kind of personality to where he'll get mad at himself even if he does something wrong that's minor. He also at some points has low or no self worth for himself, calling himself a idiot (once again over something minor) or believing (if he thinks he's dying) that he's not worth saving. He often gets scared and/or confused easily and will start doing a supposed "coping" skill called spinning. All that really does is make him more hyper, upset, and confused than he already is. People try to tell him that, but he's too stubborn to listen. When he sad about something or someone makes him scared, Di'angelo has been known to whine (or whimper). He seems to have no problem doing this. Possibly because he does it suddenly and there's no way for him to stop it. Also, could be he does it unconsciencely. However, in the movie, Aza tells him not to whine and he obviously knows he does it because he replies that he does it when he's sad. Di'angelo obviously likes music and is talented in a variety of instruments (he prefers his guitar, though), such as a saxophone, bongos, violin, trumpet, piano, and turntables (yes, he can DJ). He for some reason can't handle drumming, but he can play bongos. He is extremely allergic to pineapples, which will result in him getting terribly ill [really don't want to go into details...] and having to go to the hospital [similar to Rigby with eggs].

He looks similar to the Di'angelo from the Animated Series. They both share the newer look. He is 6 ft tall, has silver-gray and white fur, blue eyes, floppy ears [due to weak cartilage], a large black nose, and a long fluffy tail. 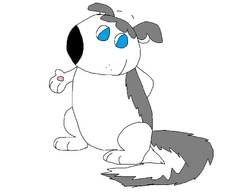 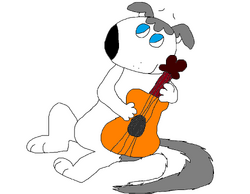 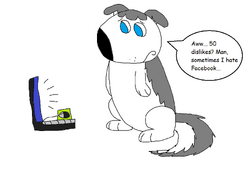 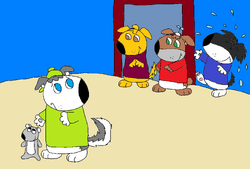 This is why Di'angelo doesn't like to sing...
Add a photo to this gallery
Retrieved from "https://diangelo.fandom.com/wiki/Di%27angelo_-_Di%27angelo_and_Aza?oldid=4947"
Community content is available under CC-BY-SA unless otherwise noted.