Cecilia is Di'angelo's baby sister. She appears in all of the Di'angelo series. She is also one of the few members in his family that he likes.

Cecilia is (currently) the youngest and last member in the Huskey Family. Her birth varies throughout the series. She was born in Di'angelo's 25th Season, it's currently unknown when she'll be born in Di'angelo: the Animated Series, and in Di'angelo and Aza, she was born a few episodes after Sicily, even though it's unknown what episode that is.

Cecilia has the personality of a normal newborn/baby. She usually prefers to be around Di'angelo (the only person she likes the most and he likes her in about the same amount). They are usually seen sleeping together in his bed (in DTAS and DaA). The only word she says is "Di'amlo" (her version of saying Di'angelo name). This is probably another reason why Di'angelo likes her so much (because the only word she can say is Di'amlo (his name)). She's pretty mature for her age being able to do that being a newborn/few days old.

Cecilia is a small stuffed animal Husky mix like the rest of the Huskey Family. She has silver fur, small ears, blue eyes, and two little arms that stick out from the pink blanket she's wrapped up in. The rest of her body isn't shown, so it's unknown how the rest of her body looks, but she apparently was said to have a black spot on her back. She also has a small tooth that sits out her mouth at times. 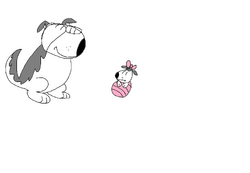 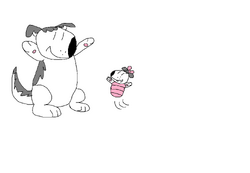 Peek-a-boo!
Add a photo to this gallery
Retrieved from "https://diangelo.fandom.com/wiki/Cecilia?oldid=5230"
Community content is available under CC-BY-SA unless otherwise noted.